The island of Sao Miguel, although volcanic in origin has many craters that have formed into lagoons and freshwater lakes that adorn this magical island in Atlantic. The many lakes on the island of Sao Miguel all have a unique charm and vary in landscape and flora. They all have played an important role in the leisure sector of the island with many tourists coming to hike the surrounding trails or enjoying a picnic by the peaceful lakes.

Furnas Lake known as Lagoa das Furnas is a crater lake located in the volcanic town of Furnas in Povoacao county. Here there is a trail that leads to the lake and is a nice and peaceful place to relax. This was a favorite amongst European royals for centuries, due to the environmental properties of the thermal springs in the region. There are some 20th century cottages along the banks of the lake as well as the famous Chapel de Victorias; a neo-Gothic style church that was built overlooking the lake by the large landowner Jose do Canto. There is parking available, washrooms a snack shop and picnic area, making it a perfect spot to come and admire this crater formed lake.

Santiago Lake known as Lagoa da Santiago is located in the town of Sete Cidades, 15 minutes from Ponta Delgada. Here is a beautiful deep green lake surrounded by thousands of trees in the Deevesa mountain range of the island. Here there is a path that leads to the crater and you get to explore the beautiful forested areas surrounding this majestic lake. This is a great day trip for those who like the outdoors and want to experience the unique lake and or the surrounding lakes that Sete Cidades has to offer. The lake is 700 meters long by 475 wide with a depth of 24 meters.

Lagoa da Rasa is a small crater lake on Sete Cidades about 870 meters above sea level. The lake is surrounded by the typical Macaronesia forests that encompass the majority of the lakes on the island. This is a one of the 7 lakes located in the area and is very photogenic with a small sand beach on the bay of the lake making it a nice place to go and relax. There are no washrooms on site and restaurants etc are all located a short drive away in the town of Sete Cidades.

Congro Lake known as Lagoa do Congro is located in Villa Franca; the islands former capital city. Here is a beautiful lake that is surrounded by numerous trees and plants both endemic and native to the Azores. This densely forested lake is a great spot to go and feel like you’re in the middle of a jungle and hear the many sounds of atlantic island nature. A favorite amongst birds for its numerous high trees and safe nesting areas. It was the personal lake of the wealthy landowner Jose do Canto who had many of the rare trees located here planted, as well as a country house located just on the banks of the lake. The lake has a perimeter of 1.25km. Over the last century numerous fish have been introduced to the lake with perch and rainbow trout being present today.

One of the most famous and most photographed lakes on the island of Sao Miguel is by far Lagoa do Fogo known in English as Fire Lake. This is one of the most beautiful spots on all of the Azores islands. It falls between Ribeira Grande and Villa Franca county. In 1982 the area was classified as a “Reserva Natural da Lagoa do Fogo” becoming a Natural park and nature reserve under Azores law. Located 1800 feet above sea level, here you have breathtaking views from the lookout points above of this crystal blue lake. The lake takes a little bit of a journey to get to but is well worth it for their breathtaking views. The lake is a size of 3 kilometers by 2.5 kilometres (1.9 mi × 1.6 mi) and is 30 metres (98 ft) deep, making in the largest body of water on the island.

The “Lagoa das Sete Cidades” knows as the Lake of Seven cities which is the name of the town that it is located it. Here you can find one of the 7 wonders of Portugal. This popular island destination is one that dates back to the original settlement of the island. The legends and mystery surrounding these adjoining blue and green lakes play an important role in Azorean folklore and fairy tales. This is the largest freshwater reservoir in the Azores with a length of 4.2km a width of 2km and a maximum depth of around 35 meters. The lakes are divided by a small bridge with large channels that allows the water to run freely. Here you can explore the lookout point “The Kings View” which was named after the King and Queen of Portugal’s visit to the island in 1901. The Lake and surrounding forested area is classified as a “Protected Landscape” by the Azores government and is a great destination to go hiking or for a walking tour. This area is popular amongst migratory birds crossing the atlantic for its unique flora and safe landscape. In the lakes fish has been added throughout the 20th century such as trout, perch, pike, carp and redhead. The area surrounding the blue portion of the lake is where there are homes and restaurants with a beautiful sand beach that allows access to the lake. 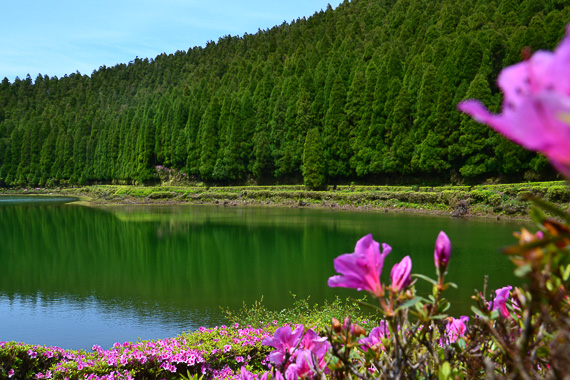 That is just a few of the beautiful lakes to be found here on the island with our next post concluding our collection of lakes on Sao Miguel as we explore the remaining beautiful lakes on this eco friendly green island.